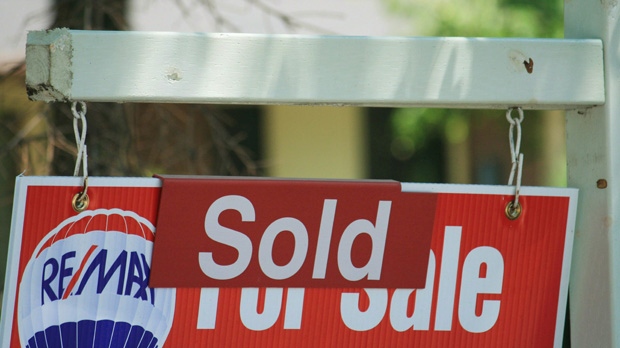 A ‘sold’ sign is pictured outside a house that was for sale. (Richard Buchan / THE CANADIAN PRESS)

OTTAWA – CMHC is moving yet again to tighten the home mortgage market with changes that would make it more difficult for certain Canadians to obtain government-secured financing for real estate purchases.

The Canadian Mortgage and Housing Corporation says that as of May 30 it will no longer insure purchases by self-employed workers without third party income validation, and will offer no insurance on Canadians seeking to purchase a second property.

Self-employed Canadians can still qualify for CMHC insurance, but must be able to provide proof of their income levels, the agency said.

It estimated the changes would effect less than three per cent of the units it insures. Given the limited use of these products, their discontinuation is not expected to have a material impact on the housing market, the agency added.

The changes are part of the agency’s continuing review of its products and core mandate to support stability in the housing market, CMHC said in a statement.

« As part of the review of its mortgage loan insurance business, CMHC is evaluating its products and services to ensure they are aligned with these objectives, » Steven Mennill, senior vice-president of insurance, said in a statement.

CIBC deputy chief economist Benjamin Tal said the move was not a surprise, adding that more changes are likely coming to reduce the agency’s footprint in the market.

The Finance Department has tightened mortgage rules on four separate occasions in the past several years — along with requiring stricter enforcement and management of loans — in an effort to weed out marginal buyers and excessive speculation in the housing market.

Former finance minister Jim Flaherty had also expressed concern that CMHC had become too large a player in the market, needlessly exposing Canadian taxpayers to risk should there be a housing crash. The agency currently has about $560 billion in outstanding mortgage insurance on its books.

Flaherty and the Bank of Canada have for several years expressed concerns that too many Canadians risked becoming over-extended in the mortgage markets, especially once interest rates begin to rise.

However, earlier this week, Bank of Canada governor Stephen Poloz said he believes Canada’s real estate market is heading for a soft landing.